Few Things To Point Out ...

Today, I went to OutFest, a gay event that celebrated the National Coming Out Day on October 11, 2005. At some point, the railroad elevated right above many buildings, provided the means to view the skyline of Philadelphia from distance. It also gave you the means to observe the rooftops that people would put on. At an abandoned building, you can see the refrigerator, stove and grocery cart sitting on the rooftop. I wonder what was the purpose of this after all?

I did not really enjoy the OutFest mainly because of few reasons but things like this is normal by any standard, I guess. HOw do I describe the OutFest? Let's imagine "gay pride block party" not during the summertime, but in fall season. No sexy underwears or naked torsos anywhere else. Everyone pretty much wore the casual jeans with sweaters. I saw one trannie with boobs, it was unbelievable huge. In fact, "she" literally bent down her back because her boobs are so enormous. She had the cane to help her move around. Eww.

I twisted my left ankle once again. C'est la vie. Too many people to converge in one setting is not my thing. I think I have claustrophobia when it comes to too many people. Speaking of people, I think New York is still the best in terms of diversity.

Whale Fatterson Is Still Retard: Whale Fatterson on a certain forum claimed that he was the instrument in making me taking "terrorist" off from the line on the top of my blogsite "The world's one and only blog reserved for the legendary Deaf Gay Militant [Terrorist]". If he wants to take the credit for something that is not true at all, then so be it.

Actually, I had a conversation with a hearing friend of mine in New York. He is a blogger as well. He and I had a frank discussion about the prospects of this blog going big-time with huge readership from the Deaf Community in general. He thought it was amusing that I put GDMT on the line, but there was a concern about the new readers coming in, especially with hearing people that might feel threatened by the word. I gave it a consideration and agreed with my friend and took it out.

And Whale Fatterson wanted to take the credit for this? Please. That fat guy claimed that he made a call to the Department of Homeland Security about the so-called "terrorist" comments. Guess what? Obviously, they did not take the fat guy seriously since they never got in touch or check with me at all.

Let's face this, McWeenie and Whale Fatterson, I averaged 320 readers per day, your blogs cannot even hit 50 per day. I provide the best source for others to rely on and laugh. It is entertainment! It is flattering that they came back to read more, poke fun and whine about different issues. But to post on the forum to whine about me is silly. To get the ideas about who I am is silly. To question about the mental status is silly.

Nancy, you do not know who I am. Sherry, to claim that you have gay friends but yet is against gay rights is not compatible at all. It is a fad among the anti-gay fellows to make these ridiculous statements. McWeenie, you think you're competing against me. In fact, I'm 8 times better than you and still growing. Mizhko, you get a life of your own, cease and desist your whiny comments about my blogsite.

To address the "respect" comments that some readers were appalled that I made fun of my parents occasionally on my blog. First of all, they do not respect me as gay man, instead -- they refuse to respect my wishes, they insist to test my beliefs, they push my boundary lines. In turn, why should I even pay an iota of respect for them? I reserve the right to make fun of 'em if I want to. Don't throw hypocrisy in my face.

Ahh, yes, thanks for visiting my blogsite.

I Was Right! Remember what I said about Xians' Doom Crapola? Here is the latest link. Guys, look busy when He comes.

Only 3 Arrested? This is travesty. Beating up on 64 years old drunkard?! C'mon. Only 3? Look at the cop riding on the horse, he was trying to protect his officers by obstructing the view of camcorder. They should arrest and charge everyone else that was involved with this fiasco. This just proved that they are pigs. Never trust a cop at all.

Related to a pig, here is another article where Deaf man was roughed up by cops in Canada.

Hurricane Vince Heading Where? To Portugal and Spain, believe it or not. This is very odd one. Normally, the hurricanes followed the current from east to west like the clockwise, but this one is heading into Portugal. Portugal is battling its worst forest fire in years due to its worst drought ever. With trees dead, having a tropical storm coming in is not going to give Portugal a break, in fact, it will create massive mudslides. Stay tuned, though. 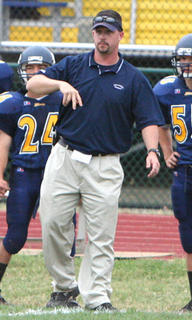 Wow, Gallaudet Is Now 5-0! Gallaudet, under the tutelage of hot coach in Ed Hottle, Gallaudet beats Wesley JV 29-19 to improve the season at 5-0 with 3 games left to go. Not bad for a first-year coach! With the win, the football team is assured of its first winning season in many years.

It is safe to say that at Gallaudet Homecoming Day, people will WATCH the game instead of chatting with friends right next to the Hotchkiss Field. I'm pretty impressed with Ed Hottle. I mean, he got the players to believe that they can win. The scores, I think, proved itself.

And a friend of mine mentioned that Ed Hottle was aware that I wrote several entries about how hot he is. And his response was charming but unexpected. He chortled to his buddy, "Now I got a wife and gay guy that thinks I'm hot, you got any?"

Update About Our Brave Soldiers! Remember this entry that I wrote few weeks ago. Here is the update of the person who owned the forum that traded nude pictures to the soldiers for dead Iraqis pictures. Sempfer Fi! Not.

Boy George Busted: In New York, Boy George called the cops because his place was burglarized. Then the cops found several grams of coke. Boy George claimed that he hosted lots of friends that come and go, one of them dropped it off or something else. He could be right. Knowing Little Italy, Lower East Side and East Village, getting coke is akin to buy a bottle of Milk, really. I saw him several times in New York bars, he cannot hang out on his own. He must have friends with him all the time. Maybe insecure? Maybe not. Not my type, he happened to be good friends with some friends that I occasionally met for drinks. He made me cringe at times, though.

Stupid Mother Of the Year: In Austin, Darren Gay and Donald Bockman are going to the prison for 6 years. Why? They beat up on a slender gay guy then sexually assaulted him as well. Why did this happen? Darren Gay was furious that this victim made a sexual advance on his younger brother, Glen Gay. The irony part is that Darren and Don used the Bible to pass the judgement, then sexually assaulted him!

And Dawna Gay, the mother of Glen and Darren, said: "This is my beloved son, and know I'm very proud of you."

Dawna Gay wins the Stupid Mother of the Year Award. But that is to be expected from fellas in Texas.