Zoe, Tullier, Stupid Conservative Prick and What Else? 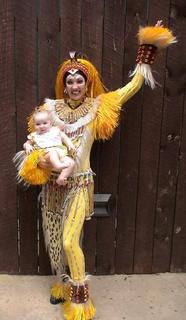 Zoe Is Not Afraid, Just Like Chlms! Gods preserve my soul -- look at the picture on your right! Most babies tend to wail out when they see something odd and all that stuff. Apparently, Zoe does not. Zoe seems to thrive on the center of attention.

The lady holding Zoe is none other than Jonathan's sister who is the Lion King dancer at DisneyWorld. Such a fabulous costume, girl.

Seeing Zoe smiling and mesmerizing with the whole thing makes me groan a little. After all, I'll have to contend with the growing pains of Zoe -- hell, I'm still tussling with Chlms after 14 years. Gawd, I'm that old.

Judy of The Fireplace's: Judy, the bartender, is extremely cool despite the fact that she looked very grouchy at times but she is great one if you get to know her. I teased her that she is Judy Garland, referring to her first name -- she shot me a wryly smile that made others howl and whoop her on.

Many times, Toby, Manny and I would rely on her to supply us the alcoholic poison in our bodies so that we'd fuck up in the process. And many times, Judy did not complain. She complained about others, but certainly not to us. Toby and I certainly love her for who she is. Judy rocks!

God Must Have Some Message For Boy Scouts! In Fort A.P. Hill, four Scouts were killed when a lightning strike them in a swift manner. Then the heat sickened countless of Scouts two days later in which GW Bush politely cancelled the "visit" and will submit the cheapassed videotape to 'salute' the fuckers. Now in Sequoia National Park, the lightning killed the troop leader and left one brain-dead kid as well as injuring six others.

The mother nature must have some kind of message towards the BSA -- repent your sins! 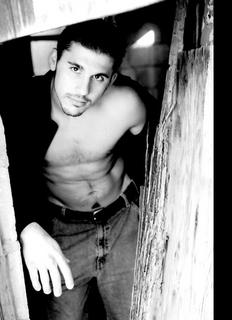 Check This Out: Few shameless to promote the talents of Deaf folks out there. Tate Tullier is currently living in New York where he is getting to expand his photography skills to include whatever is possible for him. He recently unveiled his own website which I surfed. Many pictures are simply gorgeous. It was eerie to view Joey Kolcun in something other than my fraternity brother.

Overall, it is great stuff. Check his website out!

What Is This? A Joke? A friend, Deaf258, forwarded this to me via email. At first, I thought it was typical website -- but apparently, it is not. It has captions, it has lots of stuff. I actually enjoyed it very much. Check the website out.

Liberals or Radicals: Apparently, this Republican conservative prick has nothing to do other than distorting the groups between liberals and radicals. But again, hey fella, people prefers my blog over yours. Look at your numbers and ... mine. That says something, eh? Why don't you just fold, fuckwad?

GW Bush Flipped The Bird? Some said he did. Some said he did not. But I am certain GW Bush is dumb but he is not that dumb to do the bird in front of FOX NEWS, you know how it is with FOX NEWS. FOX NEWS is one big fat machine perpetuated by Rupert Murdoch. WorldNetDaily is owned by fanatic Xians who are bent on disparaging people that does not want to do anything with its Xian beliefs. Fuck 'em all.

Confidential to David Nelson: Please read the definitions of Militant and Militarist, you dumbfuck dickwad!