Since Bush went to attend the G8 Summitt to blah about the problems across the world, Bono talked about giving the aid to Africa. Bush insisted that the Kyoto Treaty was wrong and unfair. And Bush and his cronies trimmed the Environmental Protection Agency's powers and falsified reports about the climate changes and global warming. 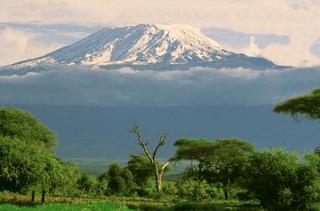 Over the time, the glaciers rested atop the craters for hundreds of thousands, if not millions, of years on the top of Kilimanjaro. Since the below on the savannah, it is pretty hot and wild animals rely on the mountains to feed them of nutrients from water and soil.

With the climate changes in the last 100 years, Kilimanjaro's glaciers has melted so dramatically that people can just hike all the way to the top without the proper equipment for mountain climbing expeditions!!!

My friend, Rico, told me that he was bit surprised to see few and smaller snow on the top of Kilimanjaro. He mentioned that he farted and took a crap and the thin air blew the stench to his group which got pissed off ... but I digress. 50 years ago, he would see plenty of glaciers surrounding the mountain.

In fact, NY POST mentioned last year that the scientists predicted that the glaciers will run out in 15 years, give or take. When it does, the wild animals in the savannah will be greatly decimated -- and they will migrate to the places where food are possible. In this snapshot, you can see the open crater which has been buried under the tons of glaciers for milleniums. It is an ominous warning that Bush Administration, conservatives and Xians refuse to listen and respect the mother nature.

Are Sheep Lemmings?: Check this out. Good thing, the wool helped some.

I Do Not Mind Her Being On The Bench:: Anyone want Judge Judy on the Supreme Court? I think she has common sense that many conservatives lacked.

Stop Calling It Holy Water!: The Priest probably got it from the tap water. And it did not burn anyone else when someone did this.