15 years ago. The Summer of 1990 altered the way I live my life. It was the summer that made me leap to the "national level" from the "local level" in terms of knowing who's who. In other words, gossip about people. Never mind, I still blamed the state of Oregon for activating my dormant allergies in 1990 which still drives me nuts from time to time.

Today, I can find information about what's happening with my friends, acquaintenances and enemies in Melbourne, London, Seattle, Los Angeles and Johannesburg, really. Of course, I exaggerate but that is not the issue here. The point is that this summer was the first time I realized that there is life outside of Virginia. And ever since, I was not able to close things out on my own. People just fed me tidbits -- perhaps in hoping to see that I'll blab about it in retaliation. Sometimes I did. Sometimes I did not care. 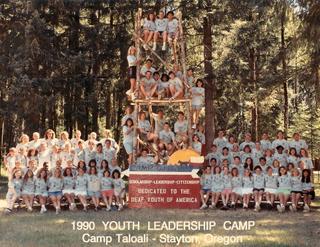 What influenced me the most during the Summer of 1990? Youth Leadership Camp.

There were so many instances that shook the foundations of my mind and soul during my stay at YLC' 90 in Stayton, Oregon.

I learned that you could hate a person with a passion -- thanks a lot, Mike Anderson.

I learned that you can make fun of people using derogatory signs, thanks to Adele Ann Eberwein.

I learned that you can laugh at people's misery and get away with it, thanks to Len Gonzales.

I learned that you can lie your way out and play along with it, thanks to Earl Parks and Kimberly Spurgis.

I learned that you can set up your own clique among the group which is ridiculous to start with, thanks to Lucy Wooten and Nola Schriver.

I learned that many leaders are not perfect, thanks to Tim Rarus and Hector Brual.

I learned that you can distort the fact and make it the "truth", thanks to Sean Virnig.

I learned that you can bullshit your way around just to get on the top of the world, thanks to Melissa Draganac.

Not all of my experiences in YLC '90 is bad, there are many good things -- but it seemed to me that many things that blew my mind away is about how people treated each other in order to elevate themselves. I see how they make fun of each other in very brutal manner. Shortly, they turned it on me. I licked my wounds -- I learned how to survive by retaliating.

But there are few good campers that I appreciated getting to know through the month at Stayton, Oregon -- Duane Kinner, Richie Moses, Kevin Souhrada, Jennifer Philips, Jaime Marshall, Ryan Reins, Heather Herzig and Wanda Riddle. For staff, they are Paula Ayers, Lisa Gonzales, Nancy Moore, George Boyd, Phyllis Brooks and Allen Hamilton. These staff are interesting, fun and easy for me to talk with during some difficult moments.

The rest of 'em are appalling to a point where I rarely talk to them after my stay in YLC. Maybe I'm from the South, I feel certain behaviors are to be duly noted. But when I first arrived and observed the behaviors, they pretty much shattered my illusion of how people should treat each other. I realized that it is up to people to decide whether if they want to shit on someone else or not.

Do I treasure my moments in YLC? Yes, of course. I would not trade it anyway. I was told by a certain Hatrak sister that the staff on '90 was one of the worst in the history of YLC. I was not even surprised. I was told by some campers who woke up in the middle of night and saw the staff running amok in the swimming pool ... drunk. Too bad, I was heavy sleeper back then. There are moments that I noticed something odd, I saw many kegs sitting behind the office. I smell alcoholic on some staff. Even worse, some 'good' staff warned some of us to steer clear of certain staff ones because they were "drunk" and "violent".

When I completed the month-long stay at YLC, I realized that I got the status quo. Once you attended YLC, many envied you. You are pretty much elevated to a level where people wished they went to YLC. To me, it was amusing and rather ... silly thing to hold the status quo.

This year is the first time that YLC came back to Stayton, Oregon after moving around the nation for a while. I heard that in the last few years, the YLC has strict guidelines to follow and of course, certain behaviors are not tolerated to a point where some staff and campers were expelled. That is good.

Too bad, I was pretty blown away back then. So you saw how I can be abrasive, rude, hilarious and all that words you wanted to describe me, YLC helped me with that.