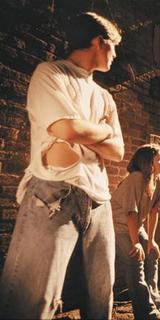 When I was in the District, I took four books from Travis, Desecration, The Remnant, Armageddon and Glorious Appearing just because I do not like to leave things unfinished. These four books are part of "Left Behind" series written by Jerry B. Jenkins and Tim LaHaye.

You see, I'm not Xian masturbator. Because I grew up as Baptist and was brainwashed that being Gay is abomination, I used to browse through the book just to antagonize my brains out.

I always grinned when Samuel 20:17 appeared, "And Jonathan had David reaffirm his oath out of love for him, because he loved him as he loved himself."

If that does not sound like gay, then I do not know what is.

As you can see, the book contradicts itself on every level to a point where everyone can justify everything from the book.

However, I like to read novels that has something to do with power, corruption, dark and melancholy future and all that stuff. The 12-book series of Left Behind seems to have it.

IN fact, the first 4 books: Left Behind, Tribulation Force, Nicolae and Soul Harvest were excellent. It was terrifying and ominous to follow the build-up of a figure that turns out to be the most powerful character in the world.

Then the 5th book through 8th book (Apollypon, Assassins, The Indwelling and The Mark), everything went downhill -- Tim LaHaye and Jerry Jenkins lacked the means to sustain the dark forces, perhaps because their mentality is all limited -- instead, they tried to proselytize incessantly about their religion -- interferred with the imaginative story.

And Nicolae Carpathia, being the AntiChrist, is supposed to be the most powerful figure in the world -- enough to terrorize everyone else in the process but the authors managed to downplay Nicolae's evil schemes by putting the characters around him that ended up being comical jesters at times. It just ruined the whole feeling of one's supremacy.

Then Tim & Jerry's incessant of tauntings and proselytizings nailed the boredom on the series for me. I did not care much to read afterwards. It was me who told Travis about it when I first read the first novel. He was hooked but he persisted throughout the whole series despite its repeated, sickening proselytizings and tauntings -- he managed to finish it all and said it was all right.

So I borrowed the book -- I'm on 9th book. I'm trying to finish all by next week. When Jerry and Tim tried to taunt or proselytize, I skip what they rantand get to the story itself. Who cares about it? I do not.

Anyway, it is ironic that one of the authors has a gay son. And yet, they wrote the novels that pretty much trashed gay people. Not surprising from the Xian fanatics, though. But they do have gorgeous drawings of men on its website. Like the one you just saw on this entry.