Only A Week To Go

Next week on Tuesday, July 19, the RAD 2005 Conference will begin in Washington, DC. I will be there to greet old friends, perhaps make new friends. Oh, yeah, probably will lose some friends as well. And yeah, some will antagonize me.

My greatest concern is that the conference seemed to destine for a so-so event or a flop one. I heard that there is a small turnout for RAD 2005 registration, but a large numbers of attendees who will only select few ones. I plan to be one of attendees that will select few ones. That's it. 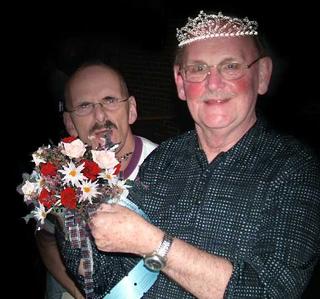 The CMRA Committee, especially with Chairman Bill Terrell and Co-Chairman Ricky Drake did an outstanding job in alienating and antagonizing many people who asked for information on different things such as workshops, art & film shows, booths, parties, change of hotel and the counter numbers of RAD participants.

The whole purpose of the conference is to market and get everyone who is Deaf (insert Hard of Hearing if you want to go PC on me, hon) GLBTs and interested hearing people to come to the conference. It is clear that the RAD 2005 Conference decidedly failed at this when they decided to berate, challenge, criticize and attacked the people that tried to bring up the questions regarding the conference.

It is only 7 days left, there is no information on what kind of workshops and SIGs for the week. These are stuff that I am interested in but too bad, they fucked it up.

It was reported that several persons are boycotting the conference and is planning to encourage the attendees to boycott as well. It was said that some CMRA members already accused me of ruining the conference. Of course, they realized that they truly fucked it, they decided to point at me who stood up for the ones that got victimized by their antics.

Let's see how it turns out next week. Of course, I shall live-blog each night with tidbits of what is happening at the conference. Of course, pictures are guaranteed.

I'll reunite with some old friends like Rico from The Netherlands, Adrian from Toronto, Alex Young, Jennifer Furlano (that girl better be there or else!), Ricky Dockter and his Company from Tacoma, Washington. That is not all, they are one of few ones that I expect to see in the District by then.

Oh, yeah, look at the picture, it is travesty to know that Bill Terrell once competed in Miss RAD Pageant as Miss Billie Tara in 1995 and *actually* won the competition.

This Is Priceless: Check this out.

Hat tip to Magatsu for this.