Home Is What It Is All About

Gotta Love Scare Gus! A while ago, Gus alerted me that his mother drove by our apartment and saw two men inside our place on a day that neither of us were at home. That freaked me and Gus out. Today, I got home with a sense of anticipation to discover the place in shambles after the burglary incident.

Then in the body, I wrote: "Nobody wanted your DVD player, flat widescreen TV, Sorenson Videophone, your computer, my stuff and your bedroom stuff -- because you are so cheap."

I was going to add that his mother was on crack or something. But I decided against it.

Gus fired back, "DO NOT EVER SAY 'BAD NEWS' ON THE SUBJECT LINE -- I NEARLY DIED OF HEART ATTACK!"

Gotta love scarying guys like that once in a while.

Gordon Is Idiot: Last night, I met Gordon at Cobalt Bar. For your information, Gordon is imbecile, simply put. Gus and I was talking about a particular hearing guy across the room when we saw Greg dismissing Gordon's claims and signed, "You're full of shit, Gordon!"

It turns out that Gordon claimed that he saw Gus and I talking about us planning to have one night stand or something like that. I exclaimed to Greg that he is absolutely correct when it comes to crap like that. Gordon, get a life. You may know signs, but you cannot read anyone's signs worth a shit. So fuck off. 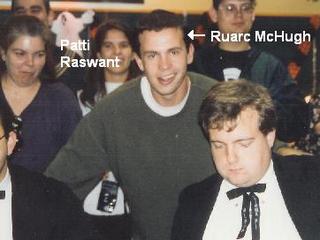 Where Is Ruarc & Patti?!: I rarely see RJ online -- I gotta slap him once in a while and maybe fuck him in the ass just to make him squirm and laugh like a fucking hyena. I love the way RJ laughed -- it reminds me of The Lion King's nutty hyena who does not know how to instigate a laugh or a cry over insignificant things but RJ is pretty cute and good guy.

As for Patti Raswant, I miss her company. I desperately want to get in touch with her in order to get together with her during the RAD 2005 Conference on July 14 - 24. Don't you think she's gorgeous even with the fact that she's over 45?

In this picture, I was pledging for Alpha Sigma Pi fraternity, Jaime Lugo was feeding me with food and drinks whereas I fed Gerardo on my left, it was fun. I found this picture -- did not know that RJ was behind me and Patti was smirking at our pledges' antics. 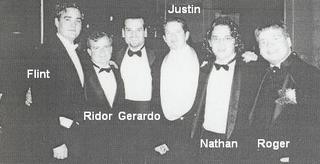 One of the Great Pictures: In 1998, Gallaudet celebrated the Tenth Anniversary of Deaf President Now Movement (DPN). IN its last bash, practically everyone went to the DPN Gala at the Washington Grand Hyatt Hotel -- suffice to say, everyone had a good time. It was surreal watching the students mingling with the faculty and staff on a leisurely manner. It was this particular party that Adrian told me he liked me and wondered if I could dye my hair white just for him. Of course, I said NO!

Then someone asked me and my fraternity brothers to pose up -- which is something I'm not a fan because I always looked awful in these craps. But this one happened to be good one, I think. Oh, yeah, Adrian is Roger's twin brother. 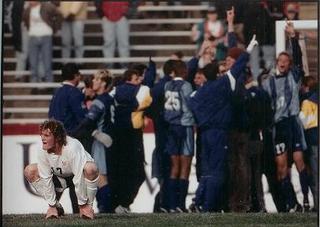 When I Win, I Gloat! It was reported that Dale Patterson is now retreating to lick his wounds after I trashed him on my blog of his antics on me and others. From what I understood someone else, he is staying away from the "internet" because of hurtful slurs that was directed at him. Good riddance, fatso tubbo.

This picture where a group of soccer players in the UCLA uniforms were celebrating the national championship by pulling an upset over heavily favored Virginia Cavaliers -- you can see Virginia's Sam Franklin trying to compose himself and could not believe that the upstarts had stole the show. You can see the guys behind Sam Franklin cheering, gloating and so on. Sometimes I can feel for Sam, sometimes I can feel for the guys in blue uniforms. It's all about the moods when I am in one. 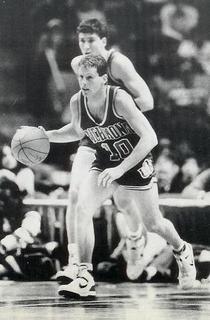 I Quarterback And Push Others: Two nights ago, Tabby and I had a discussion about how things turned out the way I prophesied. Even to many people's chagrins, things eventually ended up the way I predicted it would be. Be it sex, life, politics and all that shit. Some even went as far as to hate me for that, some probably became loyal friends with me, some just stood and observed the antics of mine from distance. Tabby also mentioned things were "bored" in the District without me around to push people's buttons. Like Helmuth said, "It is DEAD here without you!"

I think they can make it lively if they used the right matches to lit the firecrackers, simply put. Sometimes I feel like Mike Winiecki, the guy behind the guy who dribbled the basketball across the court. You see, Mike Winiecki does not like to lose a game, he knew he cannot win games for himself by scoring all points -- instead of losing, he pushed his players to play on his level so they can win. AT his own game.

As you already saw the picture, try to visualize how it works with me and my peers, I push my friends and try to pull them to play on my level the way it works for me. Why? Because it is fun ... this way.

Mike Winiecki rocked my hormones when I was in high school. Too bad he's heterosexual living his dream with some bimbo and few kids running loose.