This entry is dedicated to hearing persons who mistook me as "angry, self-hating cocksucker" who often lashed out at hearies for something that might happen to me in the past.

Such a silly theory. But that is OK. Maybe my comments are often perceived to be somewhat "anti-hearing", but it is not. It is more of "Oh, fuck, here I go again."

You get the idea why I say, "Oh, fuck, here I go again with this idiot."

As many of you knew, I am Deaf by birth from a long line of Deaf families in The South. English is not my strongest skill. I try my best all the time to express my thoughts. I always try to improve my writings. But there are people like Tommy Tricoli who took the time to disparage my comments just because I am not good at English.

Come to think of this, the blogger.com was not designed for perfect English.

Who is Tommy Tricoli? Here are his pictures. 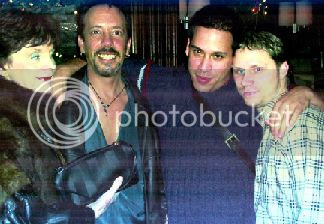 Ain't he pretty? Ugh. Not my type. I may be fat but I can lose weight while you'll be like that for the rest of your life. I can cut my hair, and I like my hair chest. I do not have problems with the way I look, but I try to improve myself anyway for better health & sanity (ha! Maybe to make that ugly freak happy as well).

You know, my former houseparent, Bobbie once told me that people who made fun of others are often the ones who has the problems with himself. Go and pop some extra anxiety pills.

This gentleman wrote a blog and stole my pictures and posted on his blog to make somewhat a threat on me. You know ... I find it offensive and flattering.

Tommy Tricoli also accused me of being the one with "NYCAttitudeLady" whereas it was my friend whom I shared the link to her about the cat being killed in that stupid commercial. She was incensed and threw Tommy few of her words -- Tommy thought it was me. Oh, lord.

All in all, Tommy Tricoli reminded me of Dorian Yanke. This is something I am *so* used to it.

I have two hearing siblings, I have some hearing relatives, I also forged a close friendship with 5 or 6 hearing persons in New York. I had two hearing ex boyfriends. I dated a number of hearing guys. I fucked many hearing guys than deaf guys. Am I anti-hearie? You decide.

Apparently, Tommy Tricoli is one stupid biased guy to start with. All of this tug-of-war continued because I made a comment to a guy that I do not approve the relationships where you play around with other guys. That would defeat the whole purpose of marriage, really.

A certain person attacked my beliefs more than the argument itself. Then hell broke loose. I told him that there are people who deserved to be infected with the virus and die with it. Because they played the russian's roulette and it misfired.

That's when Tommy Tricoli jumped in the fray and attacked me of my appearances, made a threat to push me on the speeding bus that might come up my way in East Village where I work and live. A threat that I find it scary.

So from time to time, I shot back with a comment like, "I'll buy fireworks when you're expired." He said to stuff it up my ass. I told him that I'll stuff it and match it and let it fire into his coffin.

It is stupid and silly that continues to cycle from day one. I'm willing to let it go as long as you do the same. But you continue to be like that.

I may be deaf, but you're hearie. What you said is so atypical. I'm fat, you're ugly. What next? I'm hairy, that's what I was born with. So do you but you had to shave in order to sell yourself. To me, it says a lot. But again, it is your life.