Lexington Deaf School Scammed! Carrie mentioned the embezzling incident at Lexington School for the Deaf to me last week. I thought it was interesting that not even in New York Times, NY POST or NY DAILY NEWS mentioned about that, though. Hat tip to Carrie.

I Was Waiting For This: Since The Family Stone was released, I was waiting for the newspaper to cover about the usage of sign language in this film. Checking with the film reviews in many magazines and newspapers, there were not much to report about sign language being used in the film. It could be that the society views us as normal to a point where they do not see the need to mention it. It could be that they were ignoring it altogether. But it was nice to see the newspaper in Seattle doing an article about using sign language in the film. Hat tip to Gabe.

Congratulaions, Jade! A certain friend of mine through Sarah Pack, Ann-Marie "Jade" Bryan who is the filmmaker, was chosen as the recipicent of Amos Kendall Award by Laurent Clerc Cultural Fund. Check Jade's website to see her productions.

RTD's Editorial Crucified Ann Coulter: IN a surprising move, Richmond Times-Dispatch had an editorial that rebuked Ann Coulter of her negative approach towards people who disagreed with her.

Philip Morris Distributes Free Cigs in Richmond: Last night at Capital Ale House, I had a great time with Wendy. I drank the beer that was made by the local brewery -- with 16 inch tall glass, it was easily the biggest drink for me ever. It was pretty delicious and strong. Blah, blah. After that, we were tipsy and all that and went to Barcode, a local gay pub.

I noticed that the bar was filled with smoke, huffed by these damned cigarettes. It appears to me that practically everyone else smoked in the bar. I told the bartender that I missed New York because of its no-smoking premise in bars, clubs and restaurants. I also told him that Philadelphia and the District will institute the no-smoking rule in all buildings sooner or later. The bartender said it will never happen in Richmond because Philip Morris, the manufacturer of many smoking brands, routinely distributed free cigarettes to patrons in many bars in the area. Philip Morris is headquartered in this town.

Whatever happened to CMRA? Remember last July at Rainbow Alliance for the Deaf Conference in Washington, DC? CMRA & RAD Board did not want me to be there at all, so they attempted to defame me as a terrorist by telling the hotel that I intend to "bomb" the hotel? Nothing is far from the truth. CMRA and RAD resented me because I showcased the truth on the fucked-up plans by CMRA and RAD in handling the conference.

Well, I was right after all. William "Bill" Terrell and Ricky Drake resigned as the co-chairs of RAD 2005 Conference in the midst of huge debt to several groups, including the interpreters and Service Support Providers (SSPs)

According to my sources, the CMRA organization based in Washington, DC owed anywhere between $15,000 to $30,000. From what I understand, they reserved the rooms of Grand Hyatt Hotel -- in order to have a conference at the hotel, you must circle the rooms to block out and compensate for this in order to have the rooms filled out. Well, the rooms were not filled out -- the CMRA was billed heavily for that.

Where was William Terrell and Ricky Drake in this? They fled the scene, exonerated their responsibilities. In fact, William Terrell cited the "personal crisis" in his family as the sole reason to resign as Co-Chair of RAD 2005 Conference. Probably the death of her drag queen persona.

Last October (or November?), the CMRA attempted to have an election but nobody wanted to assume the responsibility as President, Secretary and Treasurer! And today, they do not have any officers at all. Nobody wanted to be President, Secretary or Treasurer. The old gay geezers insisted that the young ones should take over. But the young ones felt that this debt & financial mess was done by whom? The old gay geezers. They should clean it up themselves.

What about the RAD Board run by whom: Bob Donaldson, Barbara Hathaway, Larry Pike and Steven Schucmaher. They do not care whether the CMRA survives or not. They practically demanded the CMRA to pay for the rooms and combo tickets. The RAD Board has done one excellent thing and that is to bankrupt the local RAD organizations each time they hosted the conference. It is time to cut the losses and force the RAD Board to pay it for themselves.

As you can see, RAD Board, William Terrell and Ricky Drake totally destroyed CMRA as I predicted all along. And the RAD participants actually allowed them to do that. I tried to warn all along. Nobody was on my side last summer.

I Miss Rico & Yassine: I got this charming picture from Rico today via the email. I so wish I was with them! They were in South America. 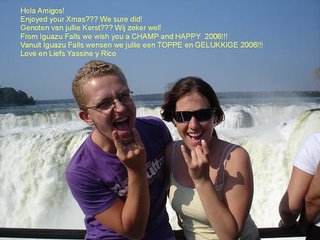 And they'll be at Vienna, Austria for NYE Celebrations. I'm so jealous of them. :-(

I miss you, Rico and Yassine.

Workout? Of course it continues. And I'm still getting there eventually.