MPD's Finest Surfing Down The 'Hood 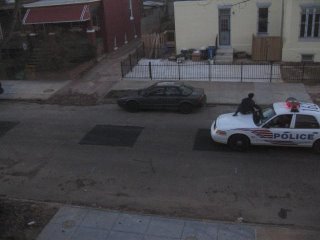 Last night, I got an email from Jason Lamberton regarding the pictures. Jason wrote on the email that reads: "omg! Luckily I had my camera in my pocket when I saw the darned cop cars whiz by with sirens blazin, delinquent cop sittin' on the hood laughin'."

In fact, this is not the first time I saw this happen in the District. It was about 5 or 6 years ago near Gallaudet when I saw a similar situation where a cop rode on the hood of a patrol car whooshing me and my friends.

But this time, Jason has the pictures to prove it. Last night at 4:58 PM, he snapped four pictures that showed two patrol cars racing down the I Street NE at about 30 MPH. Jason was surprised to see the police officer riding on the hood of patrol car #162, laughing as it ran past the stop sign on I Street and 8th Street NE along with 3 cars following them by. All of the cars had the sirens on. 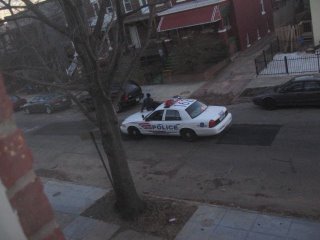 "It was VERY inappropriate of them to do that. My good friend, Darrell Ritter, did this once and nearly died. He was not the same person after that incident," Jason said. Darrell had cracked his skull -- he developed amnesia and seizures from that incident.

Upon calling the First District Station of DC's Metropolitan Police Department via the videophone, I got in touch with Sargeant Kevin Graham who asked me to send him the pictures of the cops surfing on the hood of the city-owned cars. I asked him what the official policy of MPD when it comes to things like that. Sgt. Graham said, "The officers are not permitted to ride on the hood of police cars. Mainly because of safety reasons. Other than that, I needed to get in touch with the person who took the pictures to find out who it was."

Lamberton said in exasperation, "What if this cop got injured, guess who got billed with thousands of dollars in medical bills? The taxpayers of DC!! Not only that, and what if he [the cop] died? Darrell ALMOST died. Now we are talking about millions in life insurance, compensatory costs, bevearement, funeral, court costs! what about the cop's family? he got wife and kids?! Smashing ur skull against the hard asphalt and granite curb (DC has granite and marble curbsides) will require massive amounts of MRI and CAT scans to track the brain's injuries and healing -- it costs thousands PER scan! Now, if the skull cracks and the brain hemorrhages, it will require emergency brain surgery and some follow-ups -- brain surgery, that's another like 100 - 500,000 dollars!"

"I ain't paying for some cop car-surfing thru taxes. DC has like 600,000 people so that tangibly impacts the people, especially poor people if they have to pay like $5 in taxes for some stupid cop's actions! Ahhhh how that really reflects the true character and color of DC -- lousy, corrupt cops -- lousy, corrupt citizens! If a catastrophe hit DC, we'll witness New Orleans all over again. I'm frustrated, I tell you!" 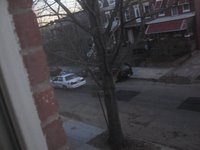 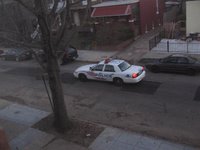 Click on All Images To Enlarge
Note: All images are owned by Jason Lamberton.

Stay tuned for further information on First District Station whether if they will do something about it. Or bury it as usual?