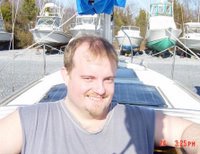 It Is Nice To Relax In Jacuzzi: For the last few days, I had the opportunity to bask myself in my friend's jacuzzi. Of course, no clothing is needed. It was nice just to be myself. This place is absolutely stunning. A hearing friend invited me to spend few days at his palace and my gosh, I had a relaxin' time, doing nuthin' but doing errands and workouts. I also visited his sailboat which I am looking forward to experience for the first time ever in the summertime.

Your 15-Minute Fame Is Finished, Heather: I got a tip from a friend to check the latest issue of GLAMOUR (February 2006) on page 206. I went to the store and checked it, it reads:

"The KISS I'll never forget"
"I was born mostly deaf, but a few years ago my hearing was restored with a cochlear implant. I remember my first kisses as a hearing person. My husband, John, kissed my forehead, cheeks and ears. I could hear his breathing and the sound of itmade my head spin. It was a brand-new world, even though we'd been married for six years. His breath in my ear can still melt my heart sometimes -- it reminds me of a very calm ocean." -Heather Whitestone McCallum, 32, Miss America, 1995

Are you sure, Heather, it was the ocean itself? I thought the sounds of flushing toilet is fitting thing to compare! Hat tip to Perlis.

Bad Luck for This Fan! This fan once had a ticket that he sold to someone else -- thus he missed the once in a lifetime feat by Wilt Chamberlain who scored 100 points in one game. Then 44 years later, he sold his ticket to a friend while he had a plan of his own. He missed Kobe Bryant's 81-point outburst. What a bad luck for this man.

This Is Amusing: Behold the production of Manny and Merritt ... in this video! Hat tip to Manny. Made me smile.

Something To Whine About Brokeback Mountain: I wrote a letter to Style Weekly in Richmond last week about its review of the film. They printed my letter this week. OH, by the way, it is now 52 days (Nearly two months) since they debuted the film and no film has been captioned on a big screen (never mind the announcements by InsightCinema.org -- they are lying!).

Gee, Thanks A Lot! These pesky Xian nuts who whined a huge river about Book of Daniel, a NBC's drama-comedy series. The NBC took the series down after only two showings. Not only that, putting them on Friday night slot is not the best way to go.

A Nice Surprise E-Mail: Last night, I was surprised to get an email from someone else that we loved for years -- the late Chanda Smith's brother. It was simply wonderful to hear from him regarding Chanda's mother.

As for the pictures regarding the ramp for the owners' dachsund dogs, I shall issue the pictures tomorrow. Sorry for the delay, hon. It is so relaxin' here in Delaware. Gee, thanks, Paul & Bob.