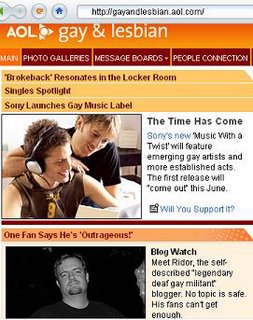 Find Someone Familiar? I was approached by the Editor of AOL's Gay and Lesbian few days ago that they were interested in doing a profile on me for its website. Naturally, I was set aback by that. Totally flattered but why not?

So I went ahead with it. And today, you can find me on its AOL Gay & Lesbian website. Don't know how long I'll be there, though. It's nice to be recognized. Thanks, AOL!

Only in Moscow! Many of you heard that it is friggin' cold in Moscow, Russia -- mostly in sub-zero temperature, I got this information via the email regarding the animals in Moscow Zoo. It reads: Moscow Zoo tried to warm up an elephant in the -30 degree weather with a bucket of vodka. It sent him off on a drunken rampage.

Only in Moscow, my dear, would they think something like that!

Xians, Conservatives and Republicans: I would like for you to defend your arguments that the same-sex marriage is not necessary after reading this article. Tell me why it is necessary to protect your "traditional" marriage but forbade gays from protecting their assets with their loved ones? C'mon, tell me what is so noble about banning gay marriages? Tell me why it is important to make it "traditional" marriage? Most of your arguments regarding the issue to protect the traditional marriage are not valid at all. Shame on you, dirty Xians, Conservative pigs and filthy Republicans.

CWU's Article on Deaf Gal: At Central Washington University in Ellensburg, Washington -- it was rare that an article pops up about the deaf student at CWU, let alone take the front cover of the college's paper. Congratulations, Regina!

Tales of the eBay: I enjoyed surfing the eBay.com at times, they sometimes sell funniest things out there. Thanks to Zachary, I can surf these just to amuse myself. Check this out. Hat tip to Zachary. 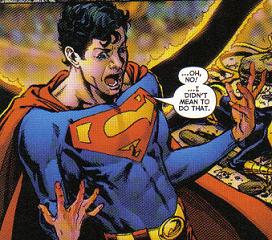 Superboy Psycho? I'm still reeling from shock after reading Infinite Crisis #4. Too bad, Pa Kent is not around to administer some kind of parental punishment. Come to think of this, it is very homoerotic if you look at it. Har har!

Someone mentioned that Superboy Prime acted like this because he was frustrated over the years of doing nothing but watching outside of current Earth's timeline. Superboy Prime (Psycho?) snapped.

It was crazy seeing Superboy Prime wanting to talk with the current Superboy but ended up instigating a massive fight that laid waste to Smallville and Keystone City. Then he decapitated Pantha. He said he did not mean to do that. Then he went on to attack several more, killing two, injuring many. It is absurd, really. I feel there is more to the story than this regarding Superboy Prime's insanity. I suspect that it has something to do with Superboy Prime's relationship with the ancient Anti-Matter character. Maybe it has something to do with Alexander Luthor. To see how Superboy Prime butchered few people, you may read this and that. Then I inserted the last page where Superboy Prime was pulled into the Speed Force with some help from the older speedsters. Superboy Prime kept on ranting until then -- someone said he did not die at all. In fact, someone else had a theory that the Speed Force will help Superboy Prime to an extent.

But the whole point is that for generations, Superman (or Superboy) is kinda the American icon that we grew to know and love -- he never killed anyone else. At least, did not do it with malice or intention. I do not think I'll look at Superboy in the same manner ever again. Maybe Geoff Johns and Phil Jimenez ruined it all for me. Good thing I had drastically cut down on reading 'em all.