Kudos to California School for the Deaf in Fremont!

More than 2 years ago, I made a vlog under (6-24-2010 Tidbits, it started from 00:00 to 05:35) which I talked about the need of having our own symbols that ultimately reflect the true beliefs, mission and social values within our communities across the country and beyond.

Not a long time ago, I was thrilled when I saw the vlog by CSD-Fremont's Superintendent Sean Virnig announcing that CSD will develop and pick the logo that ultimately represents its beliefs, mission and values as well as reflecting the school, community and alumni as well. Obviously, Supt. Virnig saw the need of having a logo mainly because he knew that having a logo/symbol will make a huge impact on people outside of Fremont.

I must congratulate the CSD community in Fremont for doing the impossible task but they successfully pulled this one extremely well.  They saw the need of having a logo that represents the school, with its beliefs, mission and values.  After a brief setback which Elena Ruiz and her so-called Bay Area DYUSA puppets protested the original logos because they argued that the logo with the famous Bear Hunt Statue is racist, demeaning, violent and cultural appropriations to an extent. 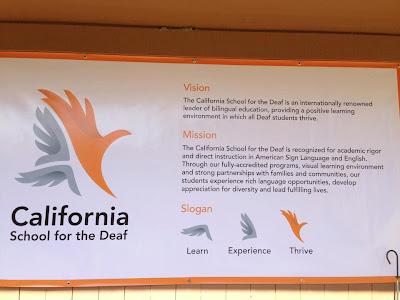 This led to CSD's decision to dump the original logos and he turned to its student body to come up with their logo vision.  Then everyone gets to vote on the logos that were created by its students at CSD.

They chose this particular logo because it fits with CSD's Motto:  Learn, Experience, Thrive. If you look at the logo itself, you'll see that it has 3 images on it (two gray, 1orange) - that represents its motto perfectly ... in ASL.

It is gorgeous!  It is fantastic!  I hope other schools will follow what CSD Fremont did.  Kudos to Supt. Virnig, Wayne Betts Jr, its students, its staff, its faculty, its alumni and beyond as well for doing the right thing!

Fabulous logo! I love it... it is a new trend, first Gallaudet and then CSDF. Looking forward to more ASL inspired logos!

It is really nice to see some logos are inspired by ASL. First Gallaudet and now CSDF! I hope other Deaf schools will follow the examples. Is there any other places that have ASL inspired logos?