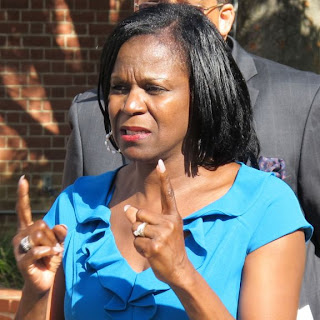 When Dr. McCaskill held a press conference, the representatives of Family Research Council stood next to her. Dr. Angela McCaskill had the nerve to thank the FRC for their support. FRC has been classified as a hate group by Southern Poverty Law Center (SPLC). It is obvious that Dr. McCaskill is clueless about the FRC's background at that time.

This woman has a doctorate degree, for chrissakes! This raised a legitimate question - does this woman keep up with the current events? To me, it is unlikely. Any sane person with doctorate degree would not thank nor stand next to the hate group in FRC. But Dr. McCaskill did.

That moment when Dr. McCaskill defied the Deaf GLBT people by thanking the FRC, it is much worse than just a slap on our faces. It is like she spat, slapped & punched in our faces, really!

Now the FRC has made another headline as of today, the FRC said it is OK to kidnap the children away from their gay parents. See this link for further details.

Yes, the very same group that Dr. McCaskill thanked at her press conference last October.  Yes, Gallaudet's own Chief Diversity Officer Dr. McCaskill, really! I should mention that the so-called Chief Diversity Officer was supposed to have a community dialogue with Gallaudet's GLBT students, faculty & staff since she was reinstated last January. But she cancelled it twice as of far. It is such a shame that this clueless woman who has a doctorate degree used the press conference to thank a hate group for supporting her. Imagine thanking Ku Klux Klan at her own press conference for supporting her, really.

That should tell you enough about her warped vision of diversity, really.

She was suppose to have another one today but I wonder if she did show up.

Mikey said...
This comment has been removed by the author.
5:10 AM

The Chief Diversity Officer is designed to fail because it CANNOT pleases everyone for example: religion and GBLT doesn't agree on everything, Democrats and Republicans, and few other. Gallaudet shouldn't have created that position at the first place.