You Will Act The Way I Will You To Act, Ganthet.

Already I got a couple of emails asking me to fill in on the latest quote which I quoted from Geoff Johns of Green Lantern #17:

"You will act the way I will you to act, Ganthet." 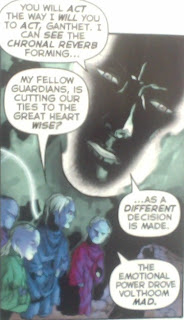 This quote was uttered by Volthoom, the First Lantern who was imprisoned by the Guardians of the Universe in the Chambers of Shadows for billions of years after Volthoom acquired the full brunt of emotional spectrum powers. The Guardians deemed him as a threat to the universe because he has the powers to distort the time & space continuum.  But in the recent issues, Volthoom was freed and in turn, he imprisoned the Guardians as well as pulling the Guardians to do his biddings in changing the timeline.

Volthoom is immensely powerful. But he is also insane. Who can blame him? I mean, he was imprisoned for billions of years just because he acquired the full powers of emotional spectrum. This time, he is free to do whatever he wanted. But in this book, the Guardians mentioned that Volthoom was already crazy before he acquired the vast powers of emotional spectrum which Volthoom quickly denied.

However, I'm providing this image to show how confident and powerful Volthoom can be. The sentence itself is quite powerful - Volthoom knew the Guardians cannot truly stop him just like that.

And why does the quote strikes me very well at this time?  After what happened on Facebook and YouTube where people attempted to subjugate me on their own terms - I fought back. And this time, it is my turn. People who tried to subjugate me will do my biddings on my own accord.

You just watch me.