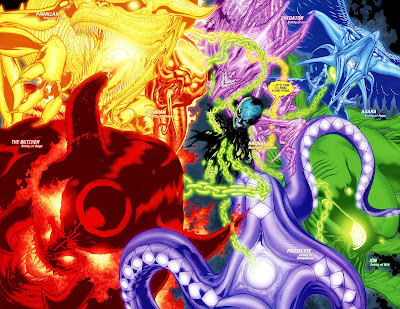 It is an open secret that I'm a huge fan of Green Lantern in the last 8 years primarily because of this dude, Geoff Johns.  In fact, when I was a kid, I was not into Green Lantern mainly because I thought being part of intergalactic police using the green rings to cruise across the universe was dumb. To make things worse, its green rings were largely ineffective against anything that is yellow. Back then, Ron Marz plotted the series. They really never explained why the green power was powerless against anything that is yellow.

I'm not kidding that no Green Lantern can use its ring to pick up the yellow plastic chair or cup!  I vividly recall one story where John Stewart, another Green Lantern from Earth rushed to another planet named Xanshi, trying to stop the Blink Bomb from blowing the planet - The Blink Bomb is a bomb that can destroy the planets. Xanshi was destroyed because John could not stop the bomb from going off. Why? The Blink Bomb was painted with yellow.  That was one silly crap, in my opinion.

Green Lantern was not my thing back then because so many questions were not addressed nor dealt with. But I was a huge fan of another comic book character, Amethyst. No, I'm not going to talk about Amethyst in this entry. I intend to do that very soon on another entry. However, Amethyst's greatest enemy is none other than Mordru, an immortal being who is quite the most powerful sorcerer who was destined to survive the universe after it dies - in fact, it was said that Mordru was never born nor die.

Whenever Mordru or Amethyst makes an appearance in any comic book series, I pick it up. Many years ago, I instructed my old friend, Dylan Westbury, that if he saw Mordru or Amethyst pop up anywhere, he is to tell me immediately. And one day, he told me that Mordru is showing up in JSA, a brand-new comic book series plotted by Geoff Johns. I quickly purchased it up front.

That's when I was introduced to Geoff from that point on. He impressed me with his ability to revamp, introduce, develop, build conflicts and all that shit. For years, I was annoyed that other authors would portray Mordru as a villain whom you can beat up in your sleep - Many would treat Mordru as a pansy villain who you can fight and stop in *one* issue. But not with Geoff, he made sure that he is truly powerful & dangerous villain and it took many issues for JSA to stop Mordru. Not only that, the dialogues by Mordru towards others were fantastic. None of this would be possible if not for Geoff.

Later, DC Comics offered him to revamp Green Lantern, especially with Hal Jordan. Remember I was not a fan of Green Lantern but with Geoff doing the script, I just had to give it a try. He did a fucking great job. The readers finally found out why the green rings were powerless against yellow and so on. He basically built the mythology of Green Lantern and beyond. Green Lantern Corps is not just an intergalactic police department who are trying to restore order and peace across the universe. It is much more than that. Not only that, he also brought different colors which has their specific emotion - Each color has its own groups and their own missions. Geoff also explored on how the energies of each color works with their central power batteries as well as whether if it can work against different colors.  Geoff also explored the secrets within the Book of Oa which is guarded by the Guardians of the Universe.

Geoff made it clear that Green Lantern Corps are not democratic. It was not, it has not and it will never be one.

Geoff also introduced the Emotional Entities - these are creatures who were the *first* ones that experienced the specific emotion billions of years ago. For that, the universe granted them the immortal & immense powers of that specific emotion. As we learned, they cannot be killed. They can be contained by tossing it inside the central power battery. Often, they would possess the mortal bodies to do whatever it wanted. I mean, they're immortal beings who survived billions of years, they'll do whatever they wanted, right?

Needless to say, I was and am mesmerized by these entities.  I'm not going to explain all in details on these intriguing entities.  However, these entities are my favorite creatures in all of Green Lantern mythology.  Not a long ago in the beginning of the War of the Green Lanterns, a renegade Guardian Krona assaulted the Citadel where the Guardians converged on Planet Oa with the emotional entities and ambushed them in a quick succession. The image of the emotional entities seizing the Guardians are quite powerful. It tells me one thing:  The entities are oldest beings in the universe. They look at you with contempt.  They know more than you do in your lifetime.

Each time I see this image, I think of them staring at you or me with ... contempt.

So when I used them on my vlogs, it is my way of informing the viewers that the next segment is the one that I held whoever I talked about ... with contempt.

And from now on, if you see the image on the below on any future entries on my blog, it means that I am going to talk about someone else ... with contempt.

And here is the image that I was referring to. 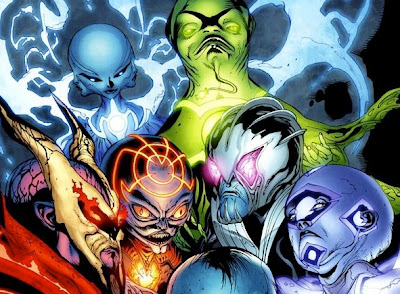