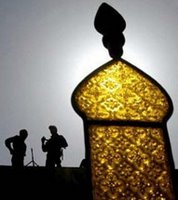 Is It Me Or What? I checked the news updates on rawstory.com which is a daily fixture on my part. There was a picture on its website which I glanced. At first, I thought it has something to do with Middle East (and it is!). But if you look at the picture, it looks like a penis ejaculating, or is it?

I guess some Muslims will want to decapitate me because I made fun of their Islamic beliefs. Pray for me -- never mind. I don't believe in that crap.

BlogActive.com Update: I personally think Mike Rogers is losing his credibility when he attempted to play a cat-and-mouse game in attempts to OUT people that worked in the US Capitol. He should just cut the chase and OUT them each time they violated the respect and dignity of gay men and lesbians in general.

However, Mike is now narrowing down to the list of 35 Republican senators -- one of them is married but plays with men at Union Station's infamous men's restroom. I had been to Union Station's restrooms just to pee. How can men play in that environment is beyond me. Its smell is pretty foul. However, I was staring at the names, I'm hoping for Cronyn (R-TX), Coburn (R-OK) or DeMint (R-SC) because they are pretty much anti-gay legislators, to say the least. But I'd love for Thune (R-SD) to be busted, simply because he's hot. I'd do him anyday. 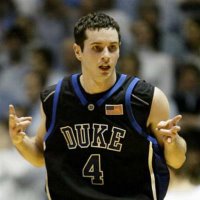 Speaking of Hot Guys: What can I say about J.J. Redick? I'm not a fan of Duke Blue Devils. I'm not a fan of J.J.'s play. His constant scoring outbursts turned me off, I guess. But he is a good player, I admit. And when he buried a 3-pointer, he would flap his arms as if he was flying as he streaked across the court. That was so cute and condescending of him to do that.

I read that he has a girlfriend. I was not amused. He should be mine. Oh, well. I'm not fond of taller guys, I'm 5'6, he's 6'4. But I'll break the rule just for J.J. This Thursday, I may be in Durham, North Carolina to watch No. 2 Duke Blue Devils women's basketball play Virginia Cavaliers -- maybe I'll be lucky to see J.J. at the game. If not, damn my luck. Probably that Coach K reads my blog and warns J.J. to stay away from me.

I thought Bomani Jones wrote an exceptional article on the fact that so many fans hated J.J. Redick but could not come up with a good reason why they hated J.J. Redick. I do not hate him, I just wanted him for myself.

On second thought, why was he signing "7" in this particular picture? Was that a sign for me? Nah, I'm just fantasizing, folks. Relax your soles.