59 Days And Counting: InSightCinema.org still hasn't distributed Brokeback Mountain. That is 8 weeks or 2 months. Gee whiz, anyone surprised with that?

Whua-Hey?! Last night, my sister mentioned that Richmond Times-Dispatch had an article that featured my comments regarding my compliants about the lack of open-captioned films in the area. Check the article if you want to. Hat tip to Hedor.

About Ben Soukup: Someone sent me the exact address of Ben Soukup's house so that I can google his home via EarthGoogle. Yeah, I saw the home. But I declined to provide the means because it is invasion of one's privacy. I feel it is inappropriate to give the link to the exact location. Sorry but that is bit too much for my taste, I think.

Cochlear Implants = Bacterial Meningitis: According to FDA, the children with cochlear implants are at high risk in getting bacterial meningitis more often than the ones that did not get it. All I can say at this is: About time, honey.

My close friend, Erin Whitney, had bacterial meningitis last year, she was hospitalized for a week with 105 degrees. Her thoughts on this subject? "Meningitis funny zero." Hat tip to Carrie. 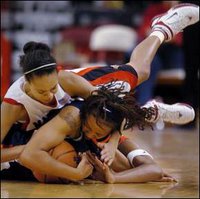 Virginia Cavaliers Succumbed to No. 6 Maryland Twerps: Gee. Thanks to the Ewans, I was able to watch Virginia women play Maryland Twerps in Comcast Center last Sunday at noon with Darlene. Thanks to Referee Bryan Enterline's bad officiating (trust me, he was that bad!), Maryland won the contest, 85-71.

It was a game of spurts. Virginia came back within six, then Bryan took over and called fouls on Virginia one too many. Screw the Zebras! Argh. Then I had to endure the barrage of heckling comments by Darlene's father who seemed to enjoy in trashing my beloved Cavaliers. But I'm tough lad -- the Cavaliers is now 13-8 heading into this weekend's tough match-ups versus No. 2 Duke and No. 1 North Carolina. God preserve us, please.

What About Mike "McWeenie" McConnell? As I suspected all along, I cruised through the Gallaudet yearbooks to see what kind of "activities" that this fool has been doing when he went to Gallaudet sometimes in the past. Apparently, this guy ... did practically do nothing at Gallaudet. He did not join any organizations. Perhaps this is the reason why he was virtually unheard of at Gallaudet. And yes, he ended up marrying a cafeteria worker. Bubba, you need to earn some stripes before you claim to represent the Deaf people in general, especially with your kind, on your blog.

Jacob Robida's Rampage: Jacob Robida used the fake ID to get in a gay bar in New Bedford, Massachusetts. He ordered two drinks then went on a rampage and injured three persons, using a gun and hatchet. He then drove to Norfolk, Arkansas where he ended up shooting a police officer dead and his friend dead. Then the cops in Arkansas blew his head off. And I have the access to Jacob Robida's myspace profile. I visited his profile -- it was filled with racism and all that. Very disturbing. Then boom, someone erased his profile. Go figure. But if you want to see his profile as is, you can find more about his profile through this article. Oh, by the way, Jacob's family member signed the anti-gay marriage petition. Go figure.

And what about fake IDs? All I can say is: Big deal. Many teenagers will find a way or other to get it, like it or not. Big non-issue here at all.

Speaking of Barfeteria: The rumors are true, Gallaudet's Barfeteria is indeed good. Despite the fact that it is good, the students still whined.

New Species of Animals Discovered! This is cool, man!

TV's CSI: Blame Me! I enjoyed watching CSI:Some City at times and sometimes I wondered if it actually helped criminals to polish their criminal activities. Apparently, it does.

Aguilera vs. Spears: I love it when Christina Aguilera talked trash about Britney Spears and I guaranteed that in the next few days, Britney will badmouth Christina ...

Volunteer ... ? After talking with friends, I may volunteer for this world-class event next year in ... Salt Lake City. Is that a hint already?

Muslim Extremists Need To Shut Up: They whined about the cartoons in Europe which ridiculed the Prophet Muhammad. The Muslims has many of their injustices in many areas, and they are so upset about this? C'mon. Even some fellas in Syria hinted that European countries need to be reminded of 9/11. I say, "Go ahead and do it -- nations in Europe reserve the right to retaliate if they did do something in their nations! Especially to Syria!" The drama in Middle East is absurd -- that is why I'm going to give you the link to my favorite gay porn star, Michael Lucas who wrote a great entry on this Muslim wacko drama.

That's All Folks! I met many people at Gallaudet last week -- it was nice to be back once in a while. To some folks that I could not really have the time to chat, there is always the next time, guys and gals. Oh, thanks to Lambykins for two shots of Absinthe. I really enjoyed the taste of licorice.