The announcement has caused me to smile and goosebumps all over my body. This is just great. I was waiting for a long time to see Adriana Trigiani's book into a movie.  Big Stone Gap's own Adriana is successful author on Big Stone Gap, Big Cherry Holler, Milk Glass Moon and Home to Big Stone Gap.

Many Critics praised Adriana for her warmth, hopeful & soft stories about Big Stone Gap, Virginia.  Big Stone Gap is a poor town with many people working in coal mines.  It was harsh place to live for many decades. I am sincerely hoping that her novels will prompt the millions of people to come and visit Big Stone Gap just like Anne of Green Gables in order to infuse the tourist funds to transform & help the town to snap out of economic depression and beyond.

My father's mother was Martha Callahan, she used to have a small house where her backyard goes up the mountain. at a pretty steep thing to hike climb up the mountains. I still remember that when I visited Big Stone Gap in 1980, my siblings and few kids who live around my Hrandmother's house - Most of us were not even 14 years ago - hell, I was 7 at that time. We climbed all the way to the top of the ridge - my CODA brother & hearing kids heard Hrandma shouting at us up on the ridge from her backyard.

My CODA brother turned to say, "Hrandmother said to get down now because the dinner is ready!" Needless to say, we managed to get down in a hurry - it was such a miracle that no one did get an injury or fatality by racing down the steep mountain. When we got there, Martha was not upset at all. It is as if she knew that her backyard is where the kids played - she's OK with it.

When I first met my Hrandmother Martha (I always referred her as Hrandmother because she was my hearing grandmother and Virginia Pool Duncan was my Deaf grandmother, hence Drandmother) in late 1970s - She demanded me to come forward and hug her. I refused. My Mom said, "Hrandma is yours, she is your father's mother."

I protested, "I already have Drandma back home in Richmond, Virginia. She is not my Grandma!!  She's not Deaf!!"

Later on that evening, my father showed me the photo albums to prove that yes, Hrandma is mine, too. When I realized that yes, she is my Hrandma - I went to see her in the kitchen to hug her. Shortly afterwards, I started to follow her around her small house out of curiosity - Hrandma went into the bathroom - she was cleaning her face and teeth. I wailed so hard when I saw Hrandma (she did not realize I was there) pulling her fake teeth out of her mouth. I freaked out and ran to living room crying to my Dad. Hell, I was 6 or whatever. It was my first time to see a fake teeth.

Hrandma has a freaking cool car which was rated as the ugliest car in the world back in late 1970s, it was AMC Pacer!!! I loved it - the car is freaking weird!

My Great Uncle, Paul Davis, (brother of Hrandma) was WWII soldier who was wounded at D-Day at Normandy Beach.  He was given the Purple Heart.  My uncle served under Lieutenant General George S. Patton at D-Day and beyond. Paul told me that he truly loved Lt. General Patton. What about General Douglas MacArthur, I asked? Paul stared at me then made a dirty look at me. He said MacArthur was a coward. Okay, what about Supreme Allied Commander Dwight Eisenhower? He gave me a thumb down. Umm? United States Army Chief of Staff George Marshall? Paul laughed out loud, "He is an idiot!"

Paul had 11 children. The first one was Paul Davis, Junior. He used to be a personal hairdresser for Elizabeth "Liz" Taylor in Los Angeles & New York until his death in 1988 in New York City. Paul Sr & Lois never knew that his firstborn son was gay and had AIDS. His parents were overwhelmed that Paul Jr willed his wealth to his parents, effectively made the Davis the richest family in Big Stone Gap for the time being. 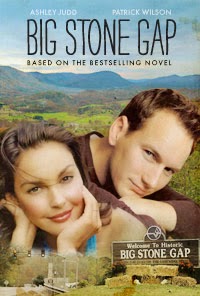 My father was on undefeated team not in PVHS but at a deaf school in Staunton, Virginia in 1954. He probably learned the toughness mentality from Big Stone Gap and it was a good thing that at VSDB, there was an outstanding Deaf Coach in T. Carlton Lewellyn who guided my father and his team to have 4 years of winning records including the undefeated season in 1954.

Despite the fact that Big Stone Gap nestled in majestic Powell Valley, 23 tornadoes struck the town in almost 60 years which is bizarre because normally tornadoes does not hit in the mountains.

Right above Big Stone Gap lies a small lake named High Knob Lake which is very cold all year long because the trees partially blocked the sunlight from hitting the waters. It is guaranteed that anyone who swims there for a long time will get light blue lips. It happened to me as well as my siblings, too!

Mom ordered me and my brother to get out of the lake to warm up. Fun times!

Anyway, back to Adriana Trigiani, I told my late father that Adriana wrote a book on Big Stone Gap. He was very proud even if Adriana is not a relative to him, he was still proud that someone from Big Stone Gap made it to the top & became successful author. Later I learned that Adriana planned to make a film on Big Stone Gap's novel sometimes in 2005 or 2007, I told Dad about it. He was looking forward to see it but that was not to be, he died in 2008 never seeing a film about his birthplace.

Now, Adriana Trigiani has announced that the nationwide release date of Big Stone Gap film is on October 9, 2015.  Which is very cool because my father from Big Stone Gap married my mother whose her birthday is on October 9!  I am excited to see Big Stone Gap on big screen - the film was produced in Big Stone Gap in 2013 with plenty of famous actors:  Ashley Judd, Patrick Wilson, Whoopi Goldberg, Jane Krakowski, Jasmine Guy, Anthony LaPalgia, Chris Sarandon to name few. I just wish my Dad was here to see Adriana's film.