Today, I was bombarded with rumors that Dr. Reginald Redding has died yesterday of a terminal illness. It was reportedly that after suffering a fall at the jail, he was hospitalized and the doctors found out that he had a terminal illness, something to do with his brain. 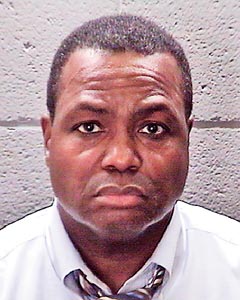 Dr. Redding was supposed to be a role model for Deaf African-Americans across the nation but he had a dark secret that plagued his career. He tends to be violent towards women.

Dr. Redding was frequently replaced, forced to resign and/or fired from his jobs as top administrator at Gallaudet, NTID and few Deaf schools including Rhode Island & Eastern North Carolina.

He was arrested after flying in from North Carolina and attacked his ex-girlfriend in Bay Area few months ago. It is not the first time that he was reportedly arrested for domestic violence. This happened in North Carolina as well as others.

'Dr. Redding was supposed to be a role model for Deaf African-Americans across the nation but he had a dark secret that plagued his career. He tends to be violent towards women.'

I am a black dude. He was not model for deaf black people for a long time before he had problem with women.

if you read again.. 'Supposed to be" does not MEAN he WAS. so technically Ridor's article is still correct regardless.

Greg, I hate to do this but if you go on Facebook and read the comments by well-known deaf African Americans individuals like Evon Black and others, they praised Reginald Redding despite the fact that he has a reputation, arrest record et al. Obviously, to some, he is STILL a "role model" which made me *facepalm* at people.