As the debate over new measures to prevent gun violence reached its apex, Republican lawmakers and conservative activists became surprisingly hostile towards the family members of those slain in the massacre at Sandy Hook Elementary. If there's one group of people who would appear to be off-limits when it comes to political pushback, one might think it'd be Newtown families, but apparently not.

The day after a Republican filibuster killed expanded background checks in the Senate, the former congresswoman had a scathing op-ed in the New York Times, condemning opponents' cowardice. It led one Republican pundit to take a very low road.

Wall Street Journal  columnist James Taranto questioned the authenticity of a New York Times op-ed authored by former Rep. Gabrielle Giffords by claiming that the op-ed appeared online too quickly to have been written by someone "who has severe impairments of her motor and speech functions."

Taranto's comments occurred on the April 19 edition of the National Rifle Association's news show, Cam & Company, where he said it was "odd" that the Times ¬op-ed, which Taranto described as "Giffords' personal reaction as somebody who's been wounded by gun violence," was published approximately five hours after the Senate voted on background checks. Taranto cast doubt on the idea that Giffords had authored the piece, commenting, "So we are supposed to believe that somehow in less than five hours a woman who has severe impairments of her motor and speech functions was able to produce 900 publishable words and put in an appearance in the White House in the course of it."

First, it's worth noting that the outcome of the Senate vote was clear the day before the Toomey/Manchin measure was defeated by a Republican filibuster. Giffords didn't have "less than five hours"; she had a full day.

Second, I suppose it's possible that someone gave Giffords a hand literally, physically typing her thoughts, but I'd remind the right that the former congresswoman was shot in the head during an attempted assassination. As a rule, decent people everywhere realize that when something like this happens, we cut folks a little slack, instead of taking wildly unnecessary cheap shots at their "severe impairments."

Is a little class too much to ask? 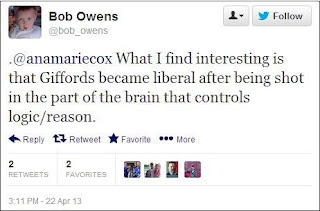