Is The Presence (aka God) Ultimate Asshole?

Everyone knew that I am not ashamed of reading comic books for many years. I really don't care if you sneered at that, you can really go fuck yourself for all I care. I enjoyed reading them because many of them has great stories & character development that you would rarely find on TV shows & films.

However, there is a particular scene that continues to make me ponder for many years. In fact, it is been 17 years since this particular scene jolted my views on God and his so-called Heavens. It made me to realize that if there is God, he is absolutely asshole to a point that I would support Lucifer Morningstar to rebel against God if he existed, that is. Lucifer was right and God was wrong on this matter, in my opinion. If this is the way it works up there in Heavens, then I do not want to be part of this shitola, actually.

Because of Raven. You can get the background on the origins of Raven on this link, Raven on Wikipedia. Raven is half-human & half-demon as her father was a powerful demon in another dimension named Trigon. Trigon raped the female human, Arella and gave birth to Raven. Unlike many others, Raven has to control her emotions to prevent her "soul-self" from changing her into a demon as Trigon wanted her to. Sometimes Raven succumbed but she always found a way to overcome her emotions and forced herself to control her soul and soul-self. By doing that, Raven repeatedly stopped her demonic father's attempts to rule, enter, destroy, enslave or terrorize many universes, dimensions and timelines. 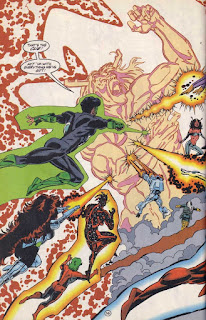 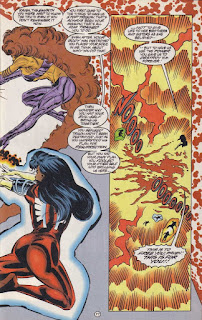 In order to understand why Day of Judgment took place in DC Universe, you need to understand and/or read the conflicts between 1994 to 1999.

DC Comics also used Hal as Parallax in his attempts to bring his hometown, Coast City back by altering the timeline in Zero Hour which also enraged Hal fans as well. Coast City was destroyed and flattened in a huge battle by Mongul and Hank Henshaw in Superman series.

In 1996, during the FINAL NIGHT storyline, Hal Jordan as Parallax killed Hank Henshaw and went into the Sol in order to re-ignite the Sol to save Earth which was frozen and left Superman powerless as the sun was being drained by Suneater, an artificial living nebula that drained the stars in many systems and when the stars got exhausted, Suneater caused the supernova to destroy the planets & systems. When a supernova took place, Suneater used its explosion force to jump from one star system to the next star system.

Hal sacrificed himself by using the powers of Parallax to re-ignite the Sol and drained the Suneater by pulling its nebula energies into his body, effectively killed him. Of course, the fans were livid about it. The Green Lantern series declined as many fans rejected it outright.

In 1997, there was a story about God, Angels, Demons, Heavens, Hell and Earth with Justice League of America being caught in the massive conflicts. The 3-part series was called "JLA Paradise Lost" written by Mark Millar, I think.

DC Comics cannot use the word, "God" because it was already copyrighted in comic book industry by whom? Savage Dragon's writer, Erik Larsen. Instead of using "God", DC Comics used "The Presence". Instead of "Heavens",  DC Comics called it the Pax-Dei. In the Pax-Dei, it has 4 Angel-Kings who commanded their own armies to defend & protect The Presence, the Pax-Dei and our multiverses. Each Angel-King represented their groups. They are Bull Host, Eagle Host, Human Host & Lion Host.

Zauriel, a former Angel under the Eagle Host, fell in love with this mortal woman in San Francisco and asked the Angel-Kings to allow him to leave the Pax-Dei for Earth to be with this woman. Zauriel lost his immortality and was casted out. Zauriel was also dumb because when he tried to pursue that woman he fell in love with, that woman did not want Zauriel, she loved her insecure, chubby boyfriend named Jerry who works as a nurse for some hospital or clinic.

During the JLA Paradise Lost, right before he was casted out, Zauriel accidentally stumbled upon the information that Asmodel, the Angel-King of Bull Host conspired with Hell's Demon-King, Neron to plan in staging an assault on The Presence and seize the Pax-Dei for himself to rule.  So that's where JLA got involved. Asmodel realized that it is impossible for anyone else, including the angels, to rule the Pax-Dei by conquering The Presence because The Presence is everywhere - sky, angels, humans, worlds, universes and all that shit. Right after The Presence stripped Asmodel of his full powers &privileges, Neron immediately turned his back on Asmodel and told him that he'll see him shortly in Hell and vanished with his minions. The Presence threw Asmodel into Hell where he was seized, chained and tortured by Neron, his former ally for eternity.

In 1998, the successful run of The Spectre (1-62) which ultimately closed the chapter on the body and soul of Jim Corrigan, whose the Spectre has used with for about 50 years. Jim decided it was time for him to separate his soul from the Spectre and let The Presence make a pick on a new human body & soul to bond with the Spectre to continue His mission as the God's Wrath of Vengeance. Right after Jim released the Spectre, Jim Corrigan's soul was pulled into the Pax-Dei as his last word was, "Amy ..." Amy is Jim Corrigan's love and she was waiting for him to come home. The Phantom Stranger gave a firm warning that the Spectre is immensely powerful and he hopes that the next human host would be as good as Jim Corrigan to control Spectre or this universe will suffer.

Because DC Comics realized that many fans are not buying their comic books primarily because they were livid about what they did do to Hal Jordan so DC Comics hired Geoff Johns to write the big crisis called Day of Judgment in 1999 in order to bring Hal Jordan back once again. Hal Jordan did not come back as Green Lantern, he came back as the new human host of Spectre. The enraged Green Lantern fans howled with displeasure. DC Comics urged the readers & fans to give them a chance but no, the fans & readers refused.

Geoff Johns started off with the tale in Hell where Neron tortured Asmodel who was chained to the posts. Right after Neron left the area, another demon, Etrigan sneaked in to free Asmodel and told Asmodel that he has the plans for Asmodel. Then Etrigan summoned the Spectre to appear in Hell where Etrigan successfully fooled and forced Spectre to bond with Asmodel. Asmodel then froze Hell and figured out that with Spectre's powers, he can rule Earth and Hell instead of serving in Heaven. All hell broke loose on Earth.

Many super-heroes battled the demons, raw magic & Asmodel-Spectre on Earth. This crisis prompted the Sentinels of Magic to show up. Among the group was Zatanna, Zauriel, Madame Xanadu, Raven, Sebastian Faust, Phantom Stranger, Ragman, Doctor Occult and Alan Scott. Raven is generally a member of New Teen Titans but this time, this crisis forced Raven to join with the Sentinels of Magic.


In Day of Judgment #2, Raven granted her permission for Zauriel to use his holy flaming sword to slice Raven's demonic soul-self open for Zauriel, Wonder Woman, Supergirl, Mister Miracle, Alan Scott and Raven to step through the soul-self to reach the Pax-Dei. The purpose of the visit to the Pax-Dei was to find Jim Corrigan and ask him to come back to control the Spectre. When the group arrived at the entrance of Pax-Dei, the entrance has been locked.

After trying to get someone to answer the doors to no avail, Mister Miracle, a member of New Gods from the twin planets of Apolokips & New Genesis, went ahead to manipulate and opened the locked entrance - When the door opened, Mister Miracle, Supergirl, Wonder Woman and Alan Scott immediately felt the familiar force or energy of Pax-Dei which empowered, inspired, calmed and delighted them. Mister Miracle said with a smile, "Feel this? This is the Source! I wish my wife Barda was here!!!"

All except for Raven. She also felt the familiar force or energy of Pax-Dei but it did not empower her as she screamed in agony as Raven's soul-self went haywire. Raven said that the Pax-Dei's forces or energies are tearing her soul-self apart as she tried to control her pains & control her soul-self. Raven started to panic when the force continued to tear her physical body, her soul and her soul-self. The painful attacks were relentless as Raven gave up and immediately teleported herself away from the Pax-Dei, "Forgive me, my friends, I must go!"

After Raven fled the Pax-Dei, Angel Michael comes out and told the others, "Do you truly believe that The Presence would allow the daughter of Trigon to come in? Are you all out of your minds?"


At that moment, I was stunned. The Presence made it clear that Raven is not allowed to be there at all. Just because Raven's soul-self is demon by nature through Trigon who raped Arella, she's not allowed to be there? That's pretty rubbish and harsh thing to do. Is it really Raven's fault for being born as half-demon and half-human? And the Presence still rejected Raven's presence? That's pretty downright cruel. It was not Raven's fault for being like that. Raven had to keep her emotions under control all the time, but she is a human, first and foremost of all. It was not her fault that she was born with it and if God really existed out there doing that shit on innocent peoples, I don't want to be part of that crapola. Do you think Raven deserved to be treated like that?

I can alone relate to Raven. I wasn't actually supposed to be existed or born 23 years ago, but yet here I am. Funnily, Raven had to learn to master her emotions. So did I, by without taking pills that didn't really benefit or serve the true purpose. I do not trust in the Big Pharma agenda. I'm so glad that you brought it up. I thought I was frustrating alone with "The Presence."

I can alone relate to Raven. I wasn't actually supposed to be existed or born 23 years ago, but yet here I am. Funnily, Raven had to learn to master her emotions. So did I, by without taking pills that didn't really benefit or serve the true purpose. I do not trust in the Big Pharma agenda. I'm so glad that you brought it up. I thought I was frustrating alone with "The Presence."